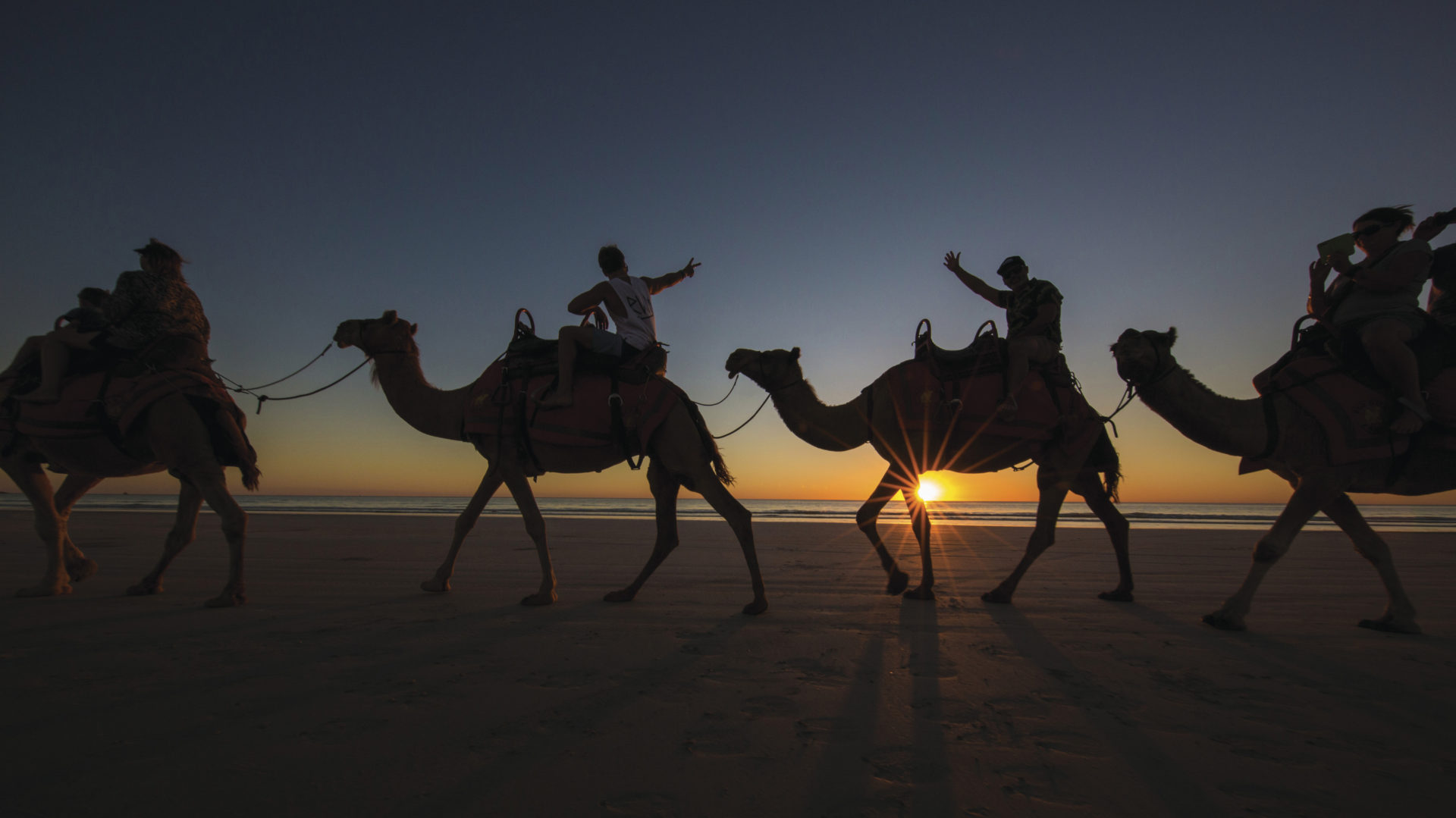 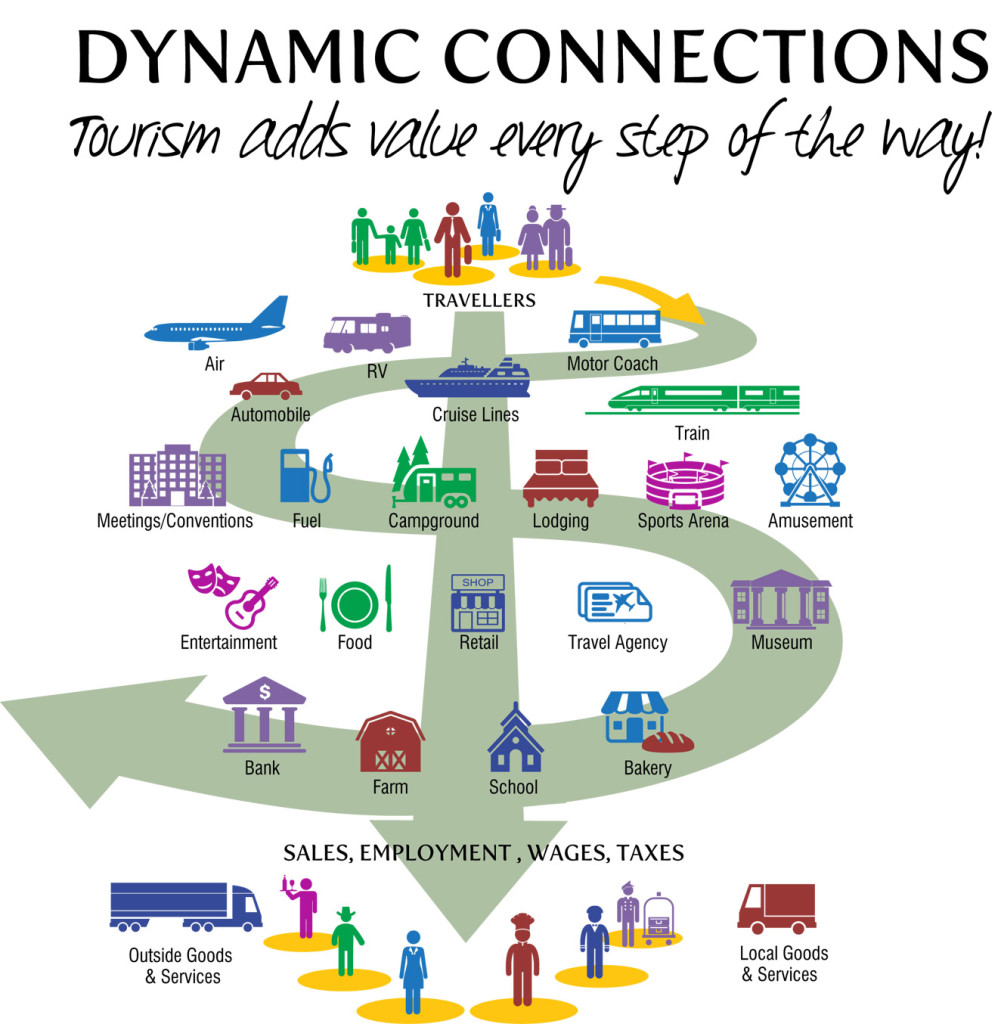 Tourism Research Australia reports that nearly half of the nation’s tourism expenditure (46% or $107 billion) occurs in regional Australia.  In addition, regional tourism directly employs over half a million people (534,000) in tourism related industries, which is more Australians than mining and more than forestry, agriculture and fishing combined.
Tourism Research Australia has estimated the value of each of Australia’s tourism regions. Their top 20 list contained a number of regions with relatively small economies, revealed that the economic importance of tourism is not determined by the size of the tourism industry within a tourism region.

Regions where tourism is most important

In terms of ranking, the economic importance of tourism is highest in Central NT, Phillip Island, Whitsundays, Snowy Mountains and West Coast − each with estimates of economic importance over 15%. Central NT ranks highest with an estimate of 24.8%7 and Phillip Island comes in second at 18.7%. The top five regions only accounted for 3% of Australia’s total tourism expenditure in 2007/08.

Tourism regions whose economies are dependent on tourism are more likely to be vulnerable to shocks that affect the tourism industry. Whether their economies are large or small, the importance of these local tourism industries to their regional economies is considerable, as unexpected shocks could impact on the entire local economy.
Australian Regional Tourism will work to make sure that regions dependent on tourism are connected to professional development, and that their needs are head.
For more information, see
Value of Australia’s regional tourism,

The States that generated better regional dispersal were:

ART analysed annual growth in international tourism expenditure for the combined capitals and the combined regions and from 2005 to 2017. Before inflation, you can see a massive difference in spending:

Allowing for inflation we see:

Have a look at the growth on our graph: 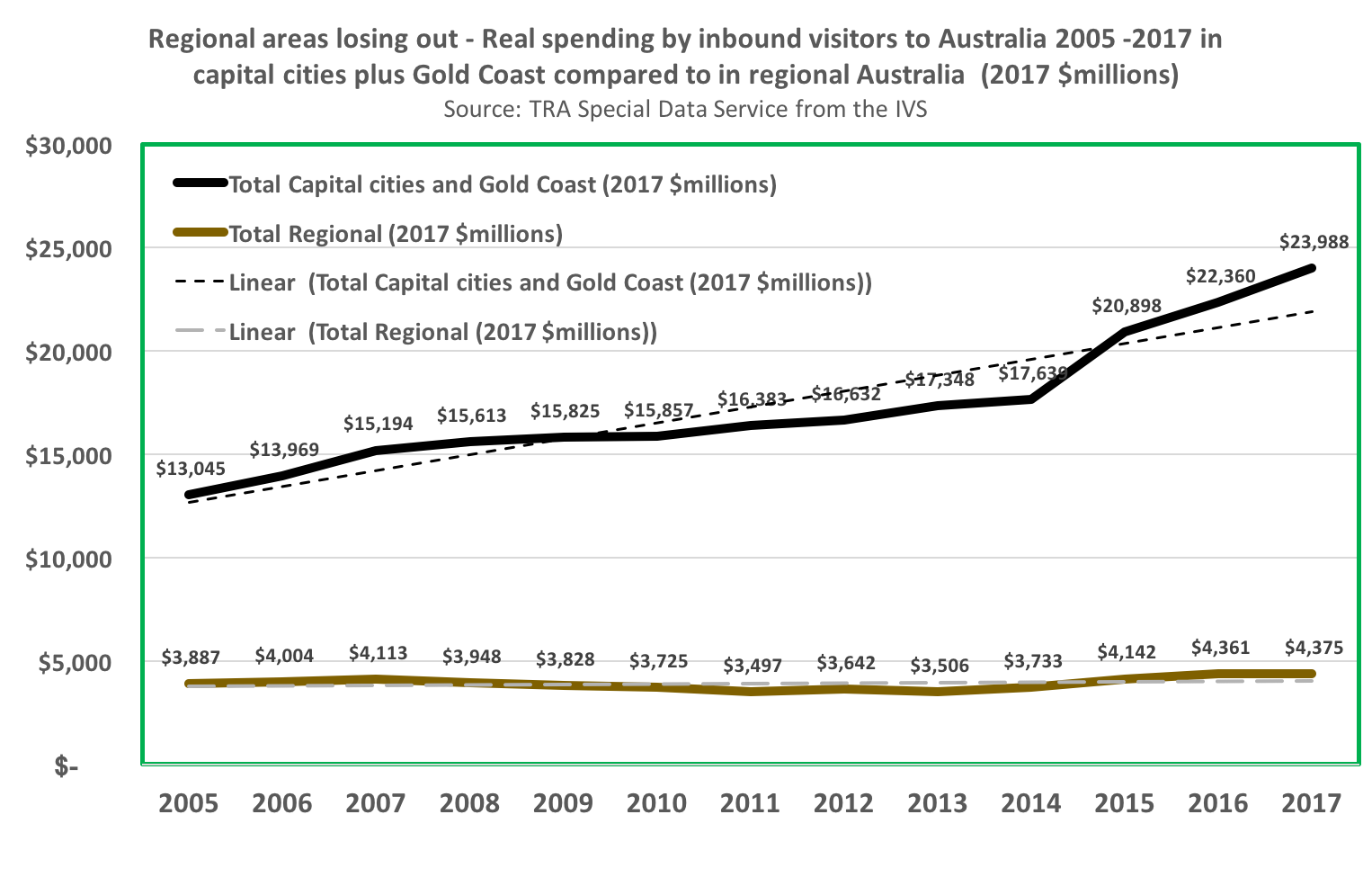 So over the last thirteen years there has been six times faster growth in real inbound spending in the capital cities than in regional Australia. This spells major problems for employment growth prospects in regional Australia, as international visitation is forecast to become increasingly dominated by inbound Asian tourists who heavily favour capital city stays.

And not only are the capitals always doing better than the regions, they have less volatility, which makes it easier to attract investment and skilled staff.

The value of tourism in local areas

In October 2016, ART commissioned DBM Consultants to undertake research into the ‘Local Government Spend on Tourism’. More than 250 of the 561 councils who were invited to take part (or 46% of councils in regional Australia) contributed to the research which was published in early 2017.
Click here to download a copy of the Local Government Spend on Tourism study. <>
The research found that in 2015/16:
1. Local Government in Australia spent an estimated $373M on the operation of visitor information centres, events, festivals, promotion, marketing and development of tourism
2. Two thirds ($250M) of Local Government spending on Tourism was undertaken by Councils located in regional and remote areas
3. 35 cents of every dollar spent went on operating visitor information centres
4. Eight in 10 Councils directly employ staff that have a Tourism role. This equated to estimated total of 1,672 full-time equivalents
5. Employment costs for individuals employed by Councils in Tourism roles was estimated at $179M, equating to 48% of Local Government spending on the operation of visitor information centres, promotion, marketing and development of tourism
6. Nine in 10 Councils agreed that Tourism offers future economic development opportunities for their local area
The research quantifies the important role local government plays in supporting Australia’s tourism industry through events and services such as visitor information centres, festivals, promotion, marketing and tourism development. Local Government themselves realise the important role they play, as indicated in the research with 9 in 10 agreeing tourism offered future economic development opportunities.